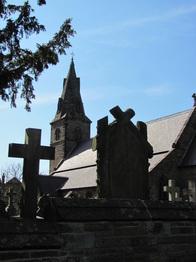 The presence of the Giffard family, the owners of the Chilllington estate, allowed the Catholic faith to continue to be practiced through the difficult times of the sixteenth and seventeenth centuries. The Giffards kept a priest who cared for the other Catholics of the area. During the Civil War, it was the Catholic families at White Ladies and Boscobel who sheltered Charles II who, in turn, promised toleration for the Catholics of the area as an act of thanks. The Giffards provided Chapels at Blackladies and at Longbirch which was for some time the residence of a number of the Bishops (Vicars Apostolic) who served the Midland District.

The Bishops moved their base of action into Wolverhampton and then to Birmingham so it was decided to close the two Chapels and to build a Church, Presbytery and School overlooking the Shropshire Union canal at the western edge of the village of Brewood. Augustus Welby Pugin was commissioned to design them in the Early English style and were built at a cost of £1,345.  It is beautifully in context for such a village as Brewood and is also a testimony to the generosity of the Giffard family who gave the land for the church and churchyard and also paid for the early parish priests’ upkeep. 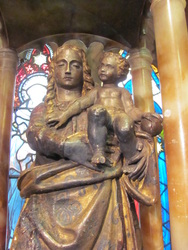 In June 1844 the Church was officially opened with Fr. Robert Richmond as Parish Priest. Sadly he lived less than a week after the opening.

The high altar is very simple, its only decoration being a lamb and flag motif deeply recessed beneath the altar table. The east window, by Hardman of Birmingham, was a gift of Pugin.

The statue of the Blessed Virgin Mary is very ancient. It was originally sited in the chapel of Blackladies Benedictine Convent at Bishop’s Wood until that building was ransacked and set on fire by Parliamentary soldiers hunting Charles II after the battle of Worcester. During the attack, the statue is said to have been pierced by a sword above the right knee and at the back is a hole supposedly caused by a musket ball.